Raspberry Pi and my Third Screen

Today, I finally figured out what was wrong with my Raspberry Pi. It worked before, connected to a TV, without ethernet, and with a power supply and keyboard borrowed from my brother. When I got my own accessories for it, though, I found the USB ports and network were dead.

Well, today I finally got around to some debugging, and found that the faulty part was the USB cable between the box and the power supply (i.e. a phone charger). Don't ask me how much I spent diagnosing that. Luckily, I can easily get micro-USB cable, even on a Saturday. (Okay, not nearly easily enough, but I did get one.)

Hooray! A working computer! Let's try new things with it! I've used apt in Ubuntu for quite some time, so I thought Raspbian would be too boring, and decided to go for Arch. So far it's been working nicely.

My first reason for having a Pi is a (hopefully) always-on IRC client. I've been using Quassel at work, where I leave a Core running on a virtual machine in the lab, and connect to that with the graphical client. That way I don't miss anything when my laptop is off.

It turns out Arch's official repos only have the monolithic build of Quassel (the core and client all in one), but a nice person called joschi maintains a Core-only package in the AUR. It worked for me with one modification – I had to update the list of supported arcitectures. The pkgbuild's error message included the name of my architecture ('armv6h'), and the PKGBUILD file left no doubt where that string should go. All clear!

The compile took quite some time (I don't know exactly how much because I've interrupted it a few times to reboot while tinkering), but it paid off. I'm on IRC again!

Half an hour after I reported my success to the Quassel AUR maintainer, the arch was added to the package. Thanks, joschi!

Now for the other thing I had in mind for the little box. My laptop's graphics card only supports two screens, and I sometimes get the feeling that two is too few.

Looks like a job for the Pi! I have a monitor conected to it, now I just need to wire it up to my computer. Well, actually, before I do that, I see the default virtual terminal font is rather large. A sudo pacman -S&nbsp;terminus-font and a setfont ter-112n in an rc file will make many more letters fit on the screen.

Now, the first step to connect the two machines was of course to SSH to the Pi, so I don't have to plug the keyboard back and forth. And also to get the middle-clicky pasting goodness of an X terminal emulator. (Goodness, did I miss that!)

Turns out, it's not that easy. At least for me – I sure hope there's an easier solution than what I came up with.

Since I need to display the console on the Pi, I started up a tmux session there. I can connect to it from my main box, but I'd like to have a “write-only” connection: I just want to send the keystrokes over, I don't need to see the third monitor's contents on the main monitor – it's on the other monitor! I could make the console window really small, but tmux insists on making the logical terminal just big enough for the smallest client connected to it. I briefly tried to find a way to use an infinitesimally small font in a terminal emulator, but to no avail.

Luckily, thanks to research for my talk for this summer's EuroPython, I know that terminal size is just two properties I can set rather easily. stty cols 256; stty rows 256; and voilà, tmux thinks it has a window that's larger than my new monitor. The only drawback is that whenever the window is resized, it picks up the new size. My research notes tell me this is handled by SIGWINCH, a SIGnal that gets sent whenever the WINdow size CHanges. Luckily, there's a signal-blocking program on StackOverflow, on which I do a quick s/SIGINT/SIGWINCH/ and compile. I hack up a command to run SSH with the sttys and a signal-blocked tmux, all in a uniquely titled xterm, and then use KDE's nifty Window Settings to make the xterm window very tiny, borderless, always-on-top, on all desktops, and in the upper left corner of the screen.

I think I'll name it pi-remote.

(Also, thank goodness for xterm's simplicity: unlike modern programs that try very very hard to never let users shoot themselves in the foot, xterm can be resized small enough to be useless. Well, useless for anything except what I'm trying to do here.)

A circle of SSH

Now that I have a way to control my second monitor, there's one more goal: running stuff on the main box. Do do that, I need to SSH back to it. Close the loop, so to say.

I'd like to go passwordless, and I'd rather not leave a private key that grants access to my main box lying around on the Pi. I think it's time for some SSH agent forwarding. It turns out Github has a nice article on how to set that up – put some lines in ~/.ssh/config, uncomment one in /etc/ssh/sshd_config, restart sshd – not straightforward but easy enough.

Oh, and I need to trust the key. I think this is the first time I've put my own key for a machine in that machine's authorized_keys.

The part that I didn't find an elegant solution for is passing the agent forwarding info through tmux. This stuff is passed around in environment variables, but the tmux session is already running, with its own environment. There's probably an amazingly obvious way to do this, but after a while of searching I decided for a brute-force approach: before joining the session I save the SSH-related env:

and before SSH-ing back, I restore it.

It doesn't call back automatically. The main machine is a laptop, so it may not always be there, and the pi should be usable without it.

In the end, I have a Raspberry-Pi-controlled third monitor, in retro text mode. I'll use it mainly for display (logs, stdout of GUI or web things, etc.), but if I need control, I just click the top-left corner on my mouse-enabled main screen and type away. A popular generalization of Fitts' law says this is very convenient, and I'm sure not arguing with that. 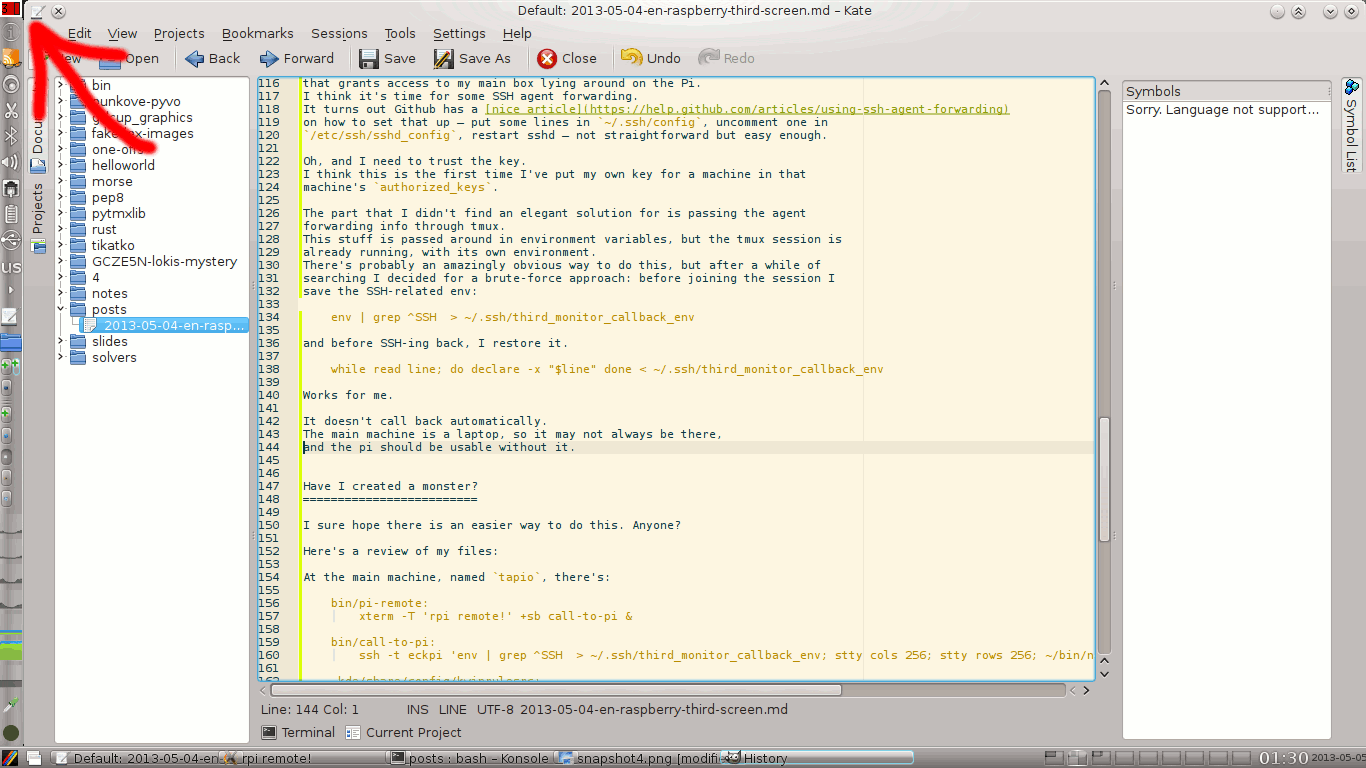 Here's a review of my files, for future reference:

And at the Pi side, there's ~/bin/nowinch modified from the signal blocker from StackOverflow, and ~/bin/tapio to SSH back home:

And, of course, an always-on tmux session. I sometimes press Ctrl-D by mistake and don't want to get disconnected, so I run the shell in a loop:

I sure hope there is an easier way to do this. Anyone?